In today’s society we are taught that the best solutions are the most expensive. We buy the high-end phones, the expensive computers, luxury cars, high-end appliances, and many other items and services based on the logic that it must be wonderful if it costs so much.

I’m as guilty of this as the next person. In my hunger for knowledge, I have paid hundreds of dollars for information products that ended up being worth less than the paper it cost to print the crap. I’ve bought high-end computers (my other primary weakness) only to discover that in a year or so they were falling apart (compared to the cheap old laptop I purchased on sale back in 2006 that is still going), and many more items that I can think of counting.

Learning a lesson from this, when I faced a recent difficulty I decided to look at what I needed instead of what society said I should buy. My male cats had decided to rebel against the small but expensive litterboxes I purchased when they were kittens. They got tired of only being able to stick a portion of their bodies in the box to do their business so they started going beside the box.

Talk about a mess! I scooped, I cleaned, I did every trick I could think of, only to have those stupid critters glare at me balefully as they stubbornly did their business with the wrong end inside of their litterbox.

I searched online for a better solution and winced at the prices. Not a single litterbox was large enough for my needs, yet every single one of them cost a small fortune. The higher the price point, the greater the argument that this box would solve my problem.

I stepped back from the problem for a few days to consider. What did I really need? Ideally, I needed a box that was large enough for my cats to fit inside with sides that were high enough to minimize scattered litter. I didn’t care if it was pretty or expensive; I just wanted something that would work.

My eureka moment came when my grandson came over to visit. He marched over to his toybox, reached in, and started pulling out toys to play with. It dawned on me that a similar-sized tote, sans lid, was considerably larger than commercial litterboxes. The sides were high enough to prevent scattering litter, even if I gave them a nice deep pile of litter to do their business in.

I didn’t want to spend the extra money on what constituted an experiment on my part (I wasn’t sure the cats would like having to hop into the thing), so I started asking my friends to scrounge me up an old storage container that was missing a lid.

One of my friends came through. I found myself the proud owner of a grungy old Rubbermaid tote that had been destined for the trash. I cleaned it out, filled it with litter, and placed it beside their regular litterbox. I scooped up the cats one by one and placed them in the container to let them know “hey stupid, here’s a new litterbox for you to try” and then waited. 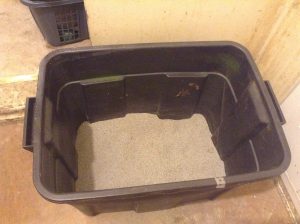 I woke up the next morning to discover that both cats had visited the new box. In fact, one of my cats made a point of visiting the new one as I scooped both boxes out! In a few days I plan to switch the cats over to the new box entirely, clean out their old litterboxes and either sell or donate the old ones to the local animal rescue.

This just goes to show that the best solution is not always the most expensive. I solved my problem without spending a penny. I love it when I can make the Gods of Consumerism cry. Every time I solve an issue without spending money, I feel like I’m giving Big Business the middle finger, so I do it as often as I can.

What was the last problem you solved by getting creative? Please share your stories in the comments below.

10 replies on “The Best Solution is Often the Cheapest”

We used an old dishpan. Its sides were higher than a typical litter box. Even though the base was actually smaller the higher sides encouraged our cat to get all the way into the box. And the kicking to cover movement didn’t spill over the higher sides.

I actually thought about using a dishpan but I was worried that my cats would be too big for it. I’m glad it worked for you!

I use a large low under bed tote no lid of corse. But used just what you did until she started preventing one of mine getting in an out so the under bed one works perfectly

Awesome! Mine is considerably deeper than that…I may have to go to a lower one when my cats get older, however. Is your cat older?

Great solution, Annie! I wish I would have thought of that when I needed a new litter box. The price of pet supplies is crazy.

One of the reasons I enjoy your posts- they stimulate my creativity.

As someone once said “the only true failure is when you stop trying.” I applaud your failures. I’ve certainly had enough of my own. They teach us what doesn’t work, so we can figure out what does.

Good choice. We switched to a tote ages ago for our cat. It is much better than a traditional litter box which invariably ended up with urine over the edge and underneath the box.

So far I really like the change. It has greatly reduced the amount of mess we have to deal with. I honestly wish I had thought about it sooner. I would have saved a fortune in litter boxes!