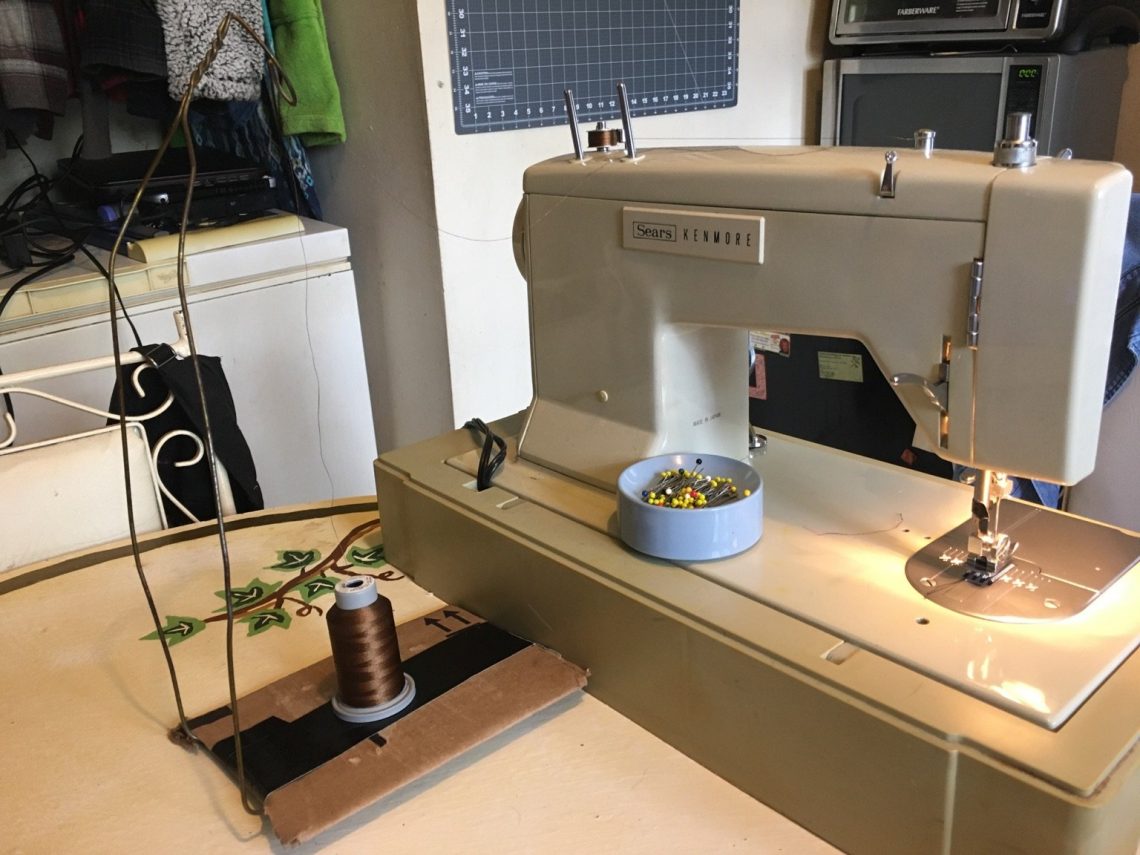 “Is it done yet?” Middle Daughter bounced in her toddler chair as she watched me sewing her latest dress.

“Not yet, honey,” I repeated patiently. “It takes time to make a dress.”

“Is it done yet NOW?” she asked a few minutes later.

The death of my mother in 1992 left me with her sewing machine and several boxes of patterns and supplies. At first I stored them away in my “retreat” – a tiny extra bedroom that I would hide in when my husband’s movie and video game habit got on my nerves.

Every time I saw that machine I felt guilty. It was a piece of my mother. She loved to sew quilts as she aged. As a child, she had even sewn me a few outfits. My family had little money and I had no skills. That machine could fix that…if I only knew how to work it. I could do what my mother did and craft the things my children needed.

My first project was an unmitigated disaster. I knew nothing about needle size, thread tension, or any of the other myriad settings and procedures needed to turn fabric into something worthy of use. I burned that first dress in the backyard in shame.

But then I became angry. I was angry because my mother had refused to teach me how to sew and angry at myself because I didn’t learn the skill by osmosis. I began lurking in the fabric sections of stores as I worked through my rage.

That was when I stumbled upon my first sewing book.

With every book I managed to acquire my sewing skills improved. My kids loved the outfits I made them. They even started putting in requests when they saw patterns that they liked. My middle daughter was especially persistent. She would sit beside me as I worked, playing with her toys as she encouraged me to “hurry up.”

Friends began to give me money to make clothes for them as well. When I started making quilts, the demand grew even higher. I didn’t make a fortune but the money I earned allowed me to buy supplies that I used to make things for my family.

But times changed. It became cheaper to buy things off the rack or at thrift stores than it was to purchase material. Wearing particular brands became popular. People didn’t want to buy something designed to last, they began to look at items like clothing, quilts, and curtains as disposable. Use it a season, toss it, then redecorate with new became the trend.

As my children lost interest in my homemade clothing I began to sew less and less. The demand for homemade quilts faded when mass-manufactured imports emerged on the market for far less than I could acquire the material to construct them. The quality was inferior (in my opinion) but those who were fond of the items didn’t care. They didn’t want to keep the quilts forever – just a season or two until they changed their color scheme.

By the time I began to explore minimalism I rarely sewed. Aside from the occasional quilt, my tools sat unused. Clothing was so plentiful that I rarely needed to buy any; people were happy to give me their discards since they bought so much more than they could use and store. Clothes shopping had become a hobby, and quickly fading trends made them disposable.

I didn’t see that ever changing so in time I gave away my sewing equipment and supplies. Save for a sewing box my daughters had gifted me with on Mother’s Day one year, everything was eliminated.

But then Coronavirus happened. Medical workers needed masks. Cashiers needed masks. Everyone seemed to need something that they could not obtain in a store, so people started asking me to start sewing again.

As I began to hand-stitch my daughter’s first mask, she emerged from her bedroom with a surprise: her dad had gifted her with a sewing machine he had found in a yard sale several years previous when she’d mentioned to him that she would like to learn but she’d never gotten around to even opening the case. Would the machine make sewing the masks even faster? she asked.

After a bit of tinkering I fired up that machine and set to work. The kids got masks, some friends got masks, and the requests increased. I started using the rotary paper cutter my kid had to make the process a bit faster.

My kid noticed. For my birthday she replaced my cutting mat, ruler, and rotary cutter. Both daughters (middle and younger) had remembered the tools I’d owned in the past so both began to hustle to replace the things I’d eliminated.

That was when Katie found a pattern for a handbag that she liked.

“If I get the stuff, will you make this for me? I’m tired of my purses falling apart,” she explained.

She was so excited that I set the current batch of masks aside to get started. She even helped me pin the pattern to the fabric.

When my daughters realized that I was going through quite a few spools of thread, they remembered how I would buy cones in days past. Middle daughter located the largest spool of black thread she could find in one store; Katie actually managed to locate some cones.

Coned thread feeds from the top as opposed to the side. To use cones with a standard machine, one typically spends $10-$15 on the special stand. As I did years ago, I refused to spend the money; I took a wire clothes hanger, some cardboard, and a bit of tape to construct one myself. I had to explain to Katie that she’d gotten the right thread; I just refused to buy the gadget that consumerism demands.

She laughed after she saw my solution.

I finished the purse in a day, reinforcing it because the pattern was not designed for the abuse I knew my daughter would give it. She keeps everything in her purse; at times she’s used it for a overnight bag when she’s taken trips to visit her fiancee (now husband). I’ve even seen her stuff her laptop in her previous bags so I took extra care to ensure that if it failed, it would not be because of my stitching.

EDIT: Katie came home from work as I was finishing this post so I managed to snap a couple of photos of the completed project.

While I intend to take most of today off from sewing, I’ll have to work up some more masks starting this evening. Here are some photos of the ones I’ve made so far.

It took several days of research to come up with the final design. I knew from previous experience that elastic (especially the thin elastic most use) won’t hold up with repeated washing and use, so I crafted straps that would hold up for an extended amount of time. This allows people to fit them to their face properly and position the straps based upon their needs.

When I consulted with nurses, they informed me that the standard CDC and NIH guidelines weren’t sufficient so I also followed their advice and used a heavy non-woven interfacing instead of the fabric liner those agencies recommended. When I make something, I want it to be as effective as possible, last as long as possible, and look nice as well.

Based upon the feedback I’ve received I suspect I will be crafting these things for quite a while. I also suspect that both of my daughters will keep me busy sewing other items as well. Middle daughter plans for me to make matching Princess dresses for her daughters as soon as her youngest gets a bit older, and Katie is already shopping for pattern lots featuring clothing that she likes.

Based upon the messages Katie has sent me just today about how her friends have been drooling over the purse I made her, I suspect I will stay rather busy.

Even more importantly, I learned a valuable lesson from this experience. Just because an old skill goes out of fashion, one should never eliminate the equipment and supplies one uses to make or repair things. You never know when times will change and those skills will be necessary once more.

For the record, however, I am still dreading that garden. If I didn’t believe so firmly that the food would be needed, I would say “forget it.” I am so very thankful that I know how to make one, however. I suspect we will need one for this year at the least. Depending upon how this mess sorts itself out, I might have to raise one next year as well. Thanks to the old skills I have been teased for over my lifetime, our family is in a lot better shape than many out there.

I am immensely thankful for that blessing.

What are you thankful for today? Please share your stories in the comments below. 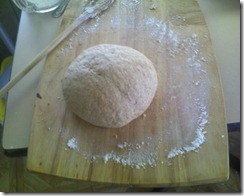 I Fixed it All By Myself! 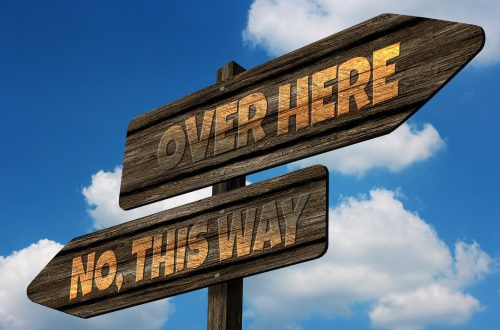 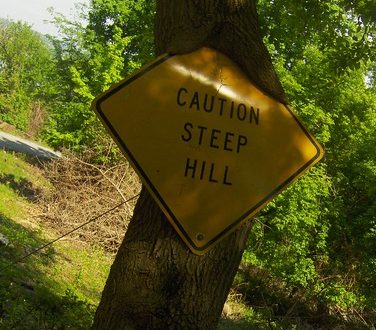 The Perception of Minimalism and Thoughts About the Economy