I moved to this house in April 2011. In the fence row of the front yard was a little sapling beside my front gate.

My friend Mr. A wanted to chop it down. I told him to leave it; it would grow into a fence post eventually. That sapling was so insignificant that I never even bothered to photograph it. I finally located a photo of it I snapped a year later when we acquired Lilly. You can see it on the right-hand side if you look closely. It’s growing alongside the post that the front gate is attached to. 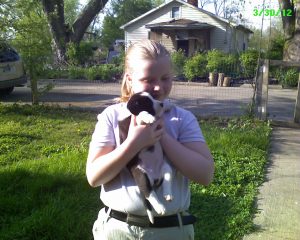 I’ve never really thought much about that sapling over the years; it was just there. A few neighbors have commented on how shady my yard stays, how private it is now but that’s about it.

I woke up, and as is my habit I brewed my morning coffee and sat on the porch sipping the first cup while my dogs had their morning sniff/potty break.

That was when I finally saw it, I raced inside to grab my camera: 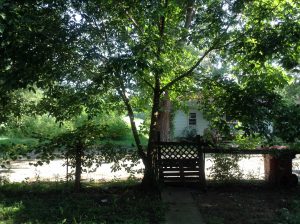 That tiny little inconsequential sapling is now a luxurious tree.

A small insignificant incident in my life culminated in this moment. More than anything that has happened in the seven years I’ve lived in this tiny home, that tree represents the changes I’ve experienced in my life.

It wasn’t the only sapling I saved over the years. I propped up the tiny survivor of a hollyhock bush on the left corner of my yard after the local water company decimated the primary bush in my neighbor’s front yard. A year or so after that a child of that bush appeared near the area where I keep my trash can. A sapling I preserved that doesn’t appear in this photo grew into a mulberry tree. The squirrels are grateful for that one since it feeds them. They hop from the branches of the one I photographed into the branches of the mulberry tree whenever they want a snack.

The magic of it is that I really didn’t do much. I just let it grow, and now look at it!

There is a lesson in that tree. Small actions can have a huge impact on our lives over time. A blog I created on a lark developed into a business. A book I wrote for my aunt became another and another until the royalties grew enough to support us for several years.

The royalties from those books, as I invest the money, will support me again in the future as my hair continues to grey.

Two days after my friend arrived, she had a job.

When she received her first paycheck, she rented a house.

When she received her last paycheck from her job in Michigan, she had her utilities switched on.

Now her daughter has managed to secure employment.

Just a small series of baby steps and she is well on her way to a better life. She is amazed at how easy it was to find work in this area, at how inexpensive the rent is. For the first time in many years she has hope.

I am honored to be a part of it.

She still has a ways to go, of course. We need to locate a refrigerator that she can afford, but for now we are freezing gallon jugs of water that she can use with a cooler to keep food cool. She will need to acquire furniture as well since she had lived in a hotel for several years but bit by bit we’ll get it sorted.

As I tell her when she thinks the hurdles are insurmountable, I started here with even less.

So no matter where you are right now, I want you to know that if you are willing to work toward your goals, you can achieve anything. I’ve done it, my friend is doing it, and you can as well.