The big day finally arrived. My youngest, the reason I worked so hard to live on less, finally graduated high school.

It was a bittersweet day. I spent close to 20 years striving to work less so that I could spend as much time with her as possible. I swam against the current as a single mom but this day marked the moment where the journey was finally over.

My baby is now an adult even more so than she was when she turned 18.

A friend of mine drove over four hours to celebrate with us. The first thing we did that day was surprise her with flowers. 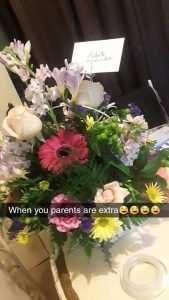 The next thing we did was take her and her boyfriend out to Olive Garden. We wanted to make this a day she would never forget. 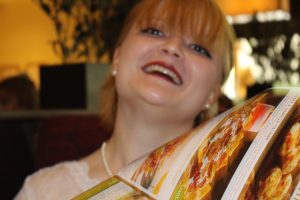 We gifted the kids with a round of gag gifts. Her boyfriend C really got a kick out of one of them! 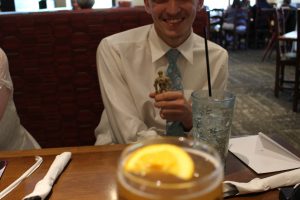 As we told him, we figured that since he was going into the Army he could use the guy for practice! Oh how he laughed! His real gift was a journal in which we inscribed “to keep track of your future adventures with Katie.” He was touched. 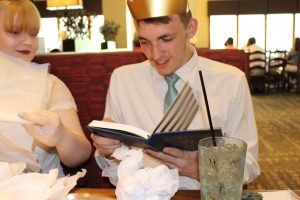 We also got him a set of crowns so he could remind Katie of who was the “king” – complete with spares for when she knocks them off his head! She got a tiara, of course – she is my princess!

After digging out some other gifts Katie finally got around to her big one from my friend. I’d given her my gift earlier because I didn’t want to detract from the moment. Here’s the expression on her face when she realized that my friend had gifted her with a pair of diamond earrings. 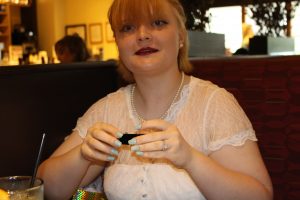 Once the dust had settled C had another surprise for my daughter. I was the only one aside from him who knew his plan. He smiled at her and announced. “I’ve got something to go with those earrings.”

That was when he proposed. 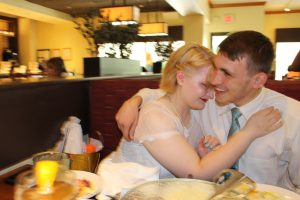 After all of that we still weren’t done. We drove them around and took lots of photos of them to mark the big day. 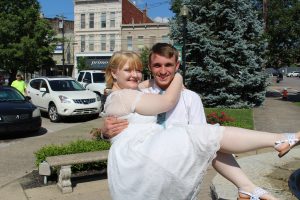 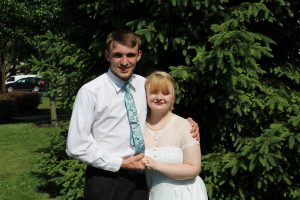 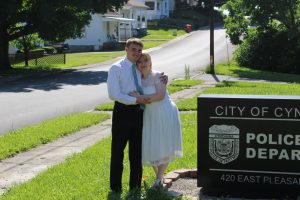 Once we dropped them off so they could do their thing prior to graduation my friend and I went out for a good stiff drink to mark the end of an era. We both needed it by then. My friend had known her since she was a baby and I needed liquid strength to get through the graduation ceremony. Not only was my youngest daughter graduating, I was lost. I’d spent so many years trying to be the best mom I could be, trying to spend as much time with her as I could. It didn’t help that, like my daughter, my dad had been dying of terminal cancer as well when I had graduated from that very same high school. I was filled with bittersweet memories, all of which came to the surface as I sipped on my Jack and Coke.

Thus prepared, we headed to the stadium for the graduation ceremony. We looked around, relieved to see that her dad, my ex-husband, actually managed to attend. He’d had Hospice take him. Once the ceremony finished we met up with the kids and took some more photos. I’m the one with the red shirt and big boobs. 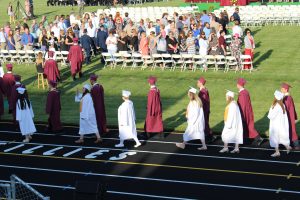 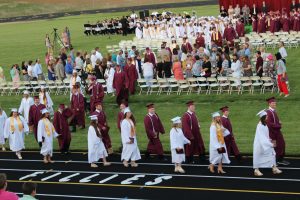 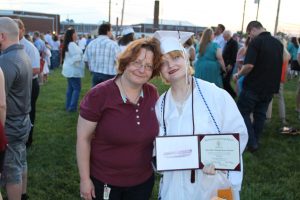 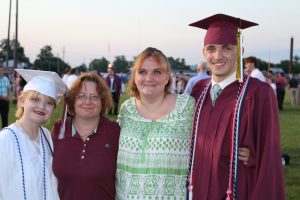 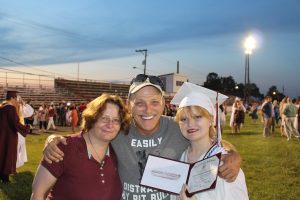 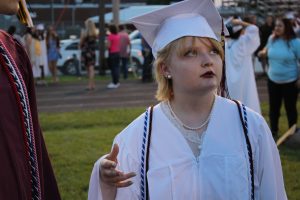 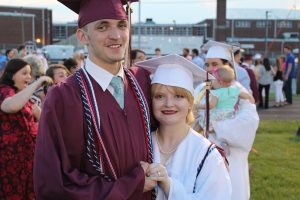 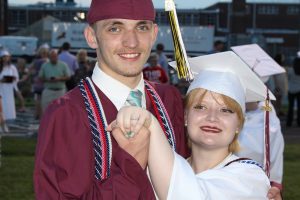 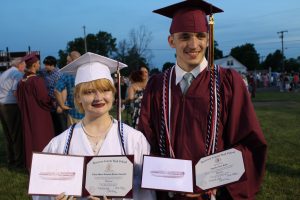 So this is it, folks. The end of an era. My goal of raising my daughter is complete. Katie has not only graduated high school, but she’s engaged as well.

I’m both proud and sad. 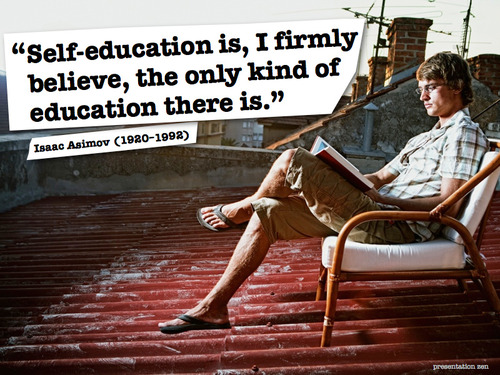 Not everyone can manage to get a formal education. In some instances, the subject of study desired isn’t even offered in a class. I learned a long time ago that if I wanted to learn about something I would have to figure out a way to study it outside of formal methods.

This determination has served me well.

When I wanted to learn more about computers, I started reading books on the subject. I scavenged computer parts from discarded machines and used them to practice what I learned until such time that I managed to take an online course in computer repair.

When I desperately needed to make repairs on my home, I located a couple of books on the subject, read them, and applied what I learned to tear out walls, reinforce the studding, repair electrical wiring, insulate, and install drywall in the place of the ancient paneling that had originally covered the walls. I even learned how to take a rotting porch apart and rebuild it to make it safe.

I’ve done this with many subjects over the years. When I needed to learn something, I would either locate some books or find someone who was experienced in the subject to pepper with questions until I figured out what I needed to do.

In recent years I used this method of self-education to learn how to start writing online, then I expanded my research to learn how to self-publish books and create my own website. I built my writing business by simply teaching myself what I needed to know.

Since the markets have changed I have decided to learn how to write in a completely new genre. I’ve been studying the art of writing fiction for several years. Since romance authors are the most successful in the field of publishing (both traditional and self-published) I’m focusing on that narrow spectrum in order to build my business.

As with everything I learn, my first projects will doubtless stink. They generally do, in my personal opinion, and that’s okay. I need those first attempts in order to learn from my mistakes and to grow closer to my goal. I know that each project will be a bit better until I am finally satisfied with the results.

I have been collecting the most ubiquitous romance novels I know of to start: Harlequin novels. I am collecting every single book I can get my hands on to analyze construction, plot, and other features. I figure that once I master that format I can teach myself how to write longer works.

I intend to use the money I earn from writing these books to support my passion. I want to continue teaching people how to live on less while keeping this website as non-commercialized as possible since I cannot in good conscience encourage people to buy more than they need.

This project is not only how I plan to support myself with my current limitations; it is also a way that I can continue to afford to write about my passion. Barbara Ehrenriech discussed this dilemma in her article In America, only the rich can afford to write about poverty. It isn’t perfect, but it is the only solution I can come up with. I am not going to give up this website without a fight, any more than I’m going to just lie down and die because of an injury that severely limits what I can do to earn money.

So wish me luck, folks. I’m gonna need it.